Black History Month Through the Eyes of a Biracial Child

This is my child, Leah Gray. She is three years old.  As I have gone through a major understanding over the last several years of what it means to be black or brown in America, I have a strong desire for her to grow up understanding the history of people of color from a young age.

In January, my husband and I took Leah to visit the Martin Luther King, Jr. statue that is found here in Fayetteville off of Murchison Road in celebration of the MLK holiday.  After having seen a picture of my husband and me in front of the big MLK Statue in Washington, DC, she wanted to understand who he was and why he was important. We explained to her that even though now people who have different colors of skin are allowed to be friends and even get married (like mommy and daddy), it was not always that way.  We told her that Dr. Martin Luther King Jr. knew that it didn't matter what color our skin was, we could all be friends, and he helped others understand that as well. 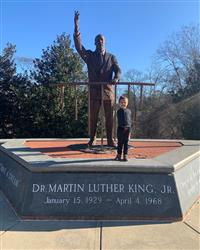 Fast forward a couple of days to Inauguration Day, January 20.  My friend, Jannell Powlen, bought the shirt Leah is wearing in the picture above for her to wear that day.  "My VP Looks Like Me. Proud Brown Skinned Girl." I told Leah that our new Vice President, Kamala Harris, also had a mommy and daddy that didn't look like each other.  I was able to explain to her that morning, and believe it myself, that she truly could be anything she wanted to be when she grew up.

Fast forward to February - and it's Super Bowl Sunday.  During the pre-game footage, there was a segment with Viola Davis explaining the integration of the NFL.  During the 1920s, when the NFL began, there were a handful of black football players in the league, which at the time only consisted of ten teams.  In 1935, the team owners had met privately and came up with a plan on how to remove the black players from the NFL. So, as Viola Davis explained, it seemed as though they just "vanished from the league." Leah was very saddened and asked "he wasn't allowed to play with them, because he has brown skin?" I reminded her that mommy and daddy explained to her that a long time brown people and white people weren't allowed to be friends or play together.

Later, in 1946, Kenny Washington became the first black player to sign with an NFL team (the LA Rams) after the removal of the previous black players.  This "re"-broke the color barrier with the NFL.  As we were watching this story unfold, my daughter, completely unsolicited, spoke up and asked "Did Dr. Luther King come help him so he could play with the white boys?"

It is so important that we teach our children, even at a young age, about their culture and the true history around that.  At Leah's age, we can't explain everything, but as she gets older, my husband and I look forward to having more open, honest, age-appropriate conversations with her.